It Ain’t Just a Guitar 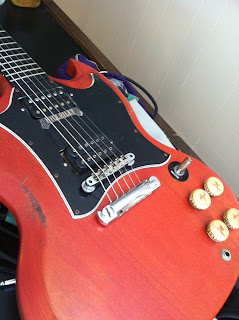 “This is my rifle, there are many like it but this one is mine.” Every time I hear that in Kubrick’s Full Metal Jacket I can’t help but look across the room at my beat to hell old Gibson, SG. It doesn’t look like much, It has burn marks on it, beer caps for knobs, huge chucks taken out of it, finish worn off the neck and a spent 9mm shell now acts as the pickup selector. It’s had different stickers on it over the years, the only one that never comes off is a logo design of the mono Lisa from old punk days a good friend long passed originally designed.

This guitar has been on stage with me at CBGB before it closed. It was in my hand the first time we played SXSX in Austin and secured our first real endorsement. It appears on basically every SH demo and I’ve written the bulk of our riffs on it jamming away in whatever bunker I call home at the moment. If you’ve seen an outdoor or festival Scattered Hamlet show you’ve probably seen Adam Newell light off the Ace Frehley style hillbilly pyrotechnics off it when he launches into the lead break in Skeleton Dixie.

It’s not one of the main instruments in the studio. Most of those duties are done by the other 6 string bandits in the band using Les Pauls, as they have better chops than me even on my best day. It does appear on the “Skeleton Dixie” album once on part of the lead break I did with Randy Cooper on “Falling Off the Wagon.” It’s too new to be vintage and it’s too beat for anyone else to want it. It sounds and plays better than new SG’s out of the box... I don’t know why, it just does. I replaced the bridge pick up with an old Dimarzio Super Distortion; that’s the original 70’s style after market upgrade. It growls mean and takes on a life of it’s own when it comes through a Marshall. It’s pure made in the USA badassary.

There is a point to this story, it’s for would be music equipment thieves. First fuck you. Don’t mess with a person’s livelihood and as far as I’m concerned, if you steal a working musicians instrument, you should be hung at high noon while the rest of us throw rank feces at you. Yeah my insurance would probably cover more than it would cost me to buy a new SG from Guitar Center....but you know what, that wouldn’t be the same. This tool is a part of me and it’s like a old friend. You can’t put a price on that and if you think that’s worth the few hundred bucks they’d give you at a pawn shop so you can buy some meth, then you have no soul.

People have said, “you must not like it much, you beat the hell out of it.” Well, it’s not a show piece son, it’s a tool. I buy my tools to use and they don’t have to look pretty. Really, if you are thinking about running off with a guitar or piece of someone’s music gear, think about it - the roots go deeper than it just being a piece some wood and metal strapped together. Oh yeah, and if I catch you with mine, expect to be another part of it’s history when I beat the shit out of you with it.
Posted by Adam Joad at 11:15 AM

Adam Joad
So people are going to ask Why a blog? Well, I can answer that and hopefully this can serve as an intro to this whole new universe for me. I am Adam Joad, for those who don’t know me I like things like American made V-Twins, Fishing, 3Generations of Hank Williams, classic rock/metal music and mixed martial arts. Most people reading this know me as the front man for Honky Tonk Hard Rock band “Scattered Hamlet.” I like to hear stories and I like to tell stories, and I have a shit ton of stories I’ve gathered. I’ve done many things in my time, though I currently tour in a band, it wasn’t my first career choice. I’ve been a maintenance worker, college football player, teacher, bouncer, animal control officer, writer, sparring partner and I could go on but this list will get boring as shit, you get it, I have had many jobs. I generally like people but I think we are getting weak in America with too much political correctness and focus on inconsequential crap. Anyway, this is my corner of the web for my insights if you want a little more than Twitter, Instagram and Facebook can offer. If I offend you, I don’t care, that’s your problem not mine, so “suck it” in advance.